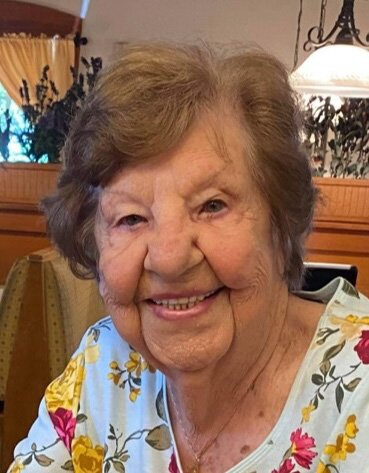 Etta lived most of her life in Chester, Boothwyn, West Chester and Glen Mills, PA. For the past two years, she made her home with daughter and son-in-law Cheryl and Bruce Caswell in Charleston, WV.  She was one of the last surviving members of the Chester High School Class of 1943, and attended all reunions joyfully. She was a member of the Ladies Auxiliary of the Boothwyn Fire Department and a former member of the Eastern Star.

She was married for more than 40 years to Robert C. Bartholomew, Sr. of Twin Oaks, PA.  At the age of 70, she married Harry E. Mawson Jr. of Glen Mills and they were married for 23 years until his death in 2017.  She worked for many years as a bookkeeper at the McElree Law Firm and the Bryan Construction Company of West Chester.

Etta was a vibrant, adventurous and fun-loving person until the end. At times in her long life she enjoyed competitive roller dancing, snowmobiling, square dancing and camping.  She was a great fan of the Philadelphia Eagles and Phillies.

She enjoyed many summers in Chincoteague, VA and winters traveling around Florida with her husband, Harry, and sister, Irene.  Etta was an unforgettable and entertaining “force of nature” who said what she thought, was the life of any party and was apt to break into a hilarious story or song. She loved people, her home was always a hub of social activity, and she made quick conversation with everyone she met.

She was a great pie-baker, an avid reader and crocheter, and an unbeatable card player who loved poker, pinochle and Phase 10.  After her vision failed, Etta listened to more than 100 audio books.  Etta was a strong woman who handled the upheavals life handed her with grace and determination to be happy and hopeful. She defeated serious illnesses several times and bounced back to an active lifestyle. The many friends and family members who loved her will find it hard to live in a world without her in it.

Besides her parents and husbands, she was preceded in death by her son Robert C. Bartholomew Jr., her brother Brinton Turner and sisters Irene Bartholomew and Avis Davies.

In addition to her daughter, she is survived by her son David Turner Bartholomew of West Chester, PA, her devoted niece Judy Dixon of Linwood, PA,  stepchildren Barbara Haney (Dave) of Media, PA, Nancy Keyes (Richard) of Boothwyn, PA, Cindy Weidman (James) of Media, PA, and Bill (Terry) of Glen Mills. She also leaves behind seven grandchildren, Miranda Rodriguez of Exton, PA, Gabrielle Bartholomew of Denver CO, Tiffany Olson of Merced, CA, Kelly Morgan, Courtney Baumwell and Chelsea Castleberry, all of Charleston, WV, and Cody Caswell of Nuremburg, Germany. She had many great-grandchildren and several nieces and nephews who she cared for deeply.

Share Your Memory of
Etta
Upload Your Memory View All Memories
Be the first to upload a memory!
Share A Memory